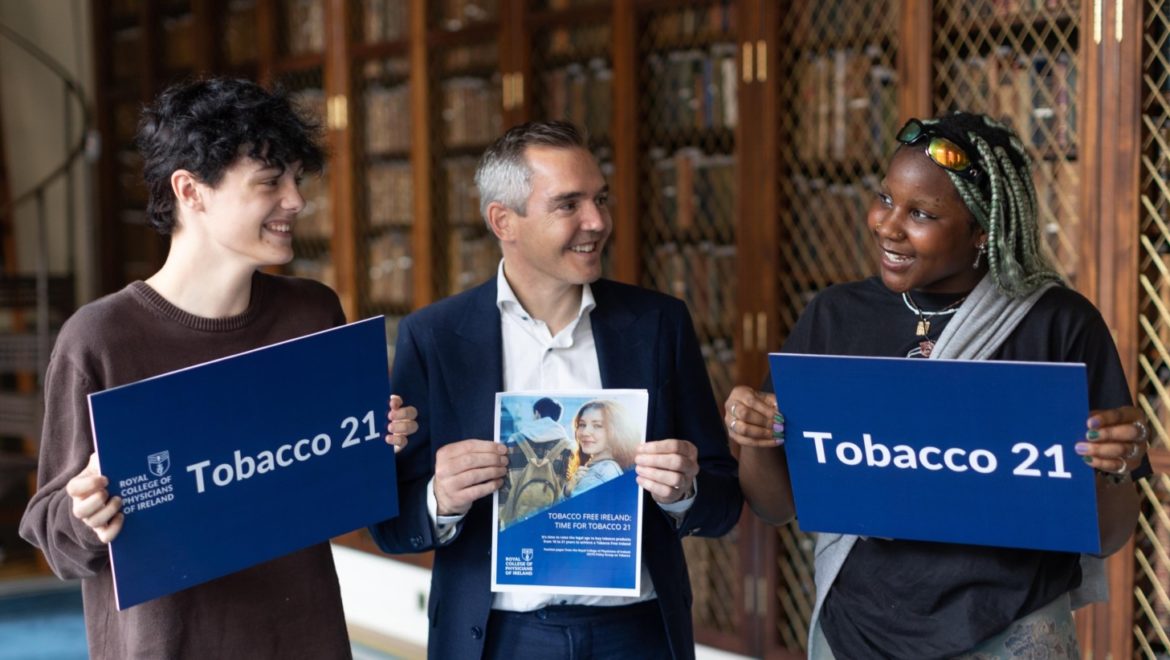 A new report from the Royal College of Physicians of Ireland’s Policy Group on Tobacco is calling for the minimum age of sale of tobacco to be raised from 18 to 21.

Launched today, the Tobacco 21 report, was developed from national and international evidence analysed by the Institute of Public Health. The report by the RCPI Policy Group says amending legislation to raise the minimum legal age for the sale of tobacco products in Ireland offers a proven approach to significantly reduce the numbers of teenagers and young adults becoming addicted to tobacco.

Nearly 4,500 people die in Ireland each year from the effects of smoking - the single biggest contributor to early death. Thousands more suffer from smoking-related diseases, including heart and lung disease, and cancers.

“After decades of progress, tobacco control is stagnating and we are actually seeing an uptick in use among teenage boys,” said Prof Des Cox, Chair of the RCPI Policy Group on Tobacco.

“We are not going to achieve the nationwide target of reducing smoking to 5% by 2025 with the policies currently in place. Tobacco 21 is a simple and effective step on the road to tobacco endgame. It requires only simple amendments to existing legislation and already has strong public support."

“Most smokers start to smoke in their teenage years, but the age at which they are starting is rising over time. The earlier a young person starts smoking the more likely they are to become addicted and the harder it can be to quit. Tobacco 21 will help to delay the initiation of tobacco use and, in turn, reduce the number of people who smoke.

“On top of associations between early first use and lifetime smoking, most teenagers report finding it easy to get cigarettes directly at the shop or through friends,” said Professor Cox, who is a consultant in paediatric respiratory medicine.

“Experimentation with smoking is highest between 15 and 17, but this cohort are less likely to have access to peer networks over 21 who could purchase for them. Tobacco 21 provides this important barrier and is vital to increasing the age of smoking initiation and the lifelong negative health impacts that come with it.”

International modelling suggests that Tobacco 21 policies can reduce smoking rates by up to 25% among 15-17-year- olds and by up to 15% among 18-20-year-olds.

The report examines the implementation, public awareness and enforcement measures required to effectively roll out Tobacco 21.

There is substantial public support for Tobacco 21 in Ireland. According to a recent survey of public opinion, 71% of the population aged 15 years and older are in favour of increasing the minimum legal age for tobacco sale to 21. Importantly 59% of current smokers and 64% of those who use tobacco products surveyed support the proposed policy change.

“Ireland has led in this space before. Innovative policies such as smoke-free workplaces in 2004 and standardised packaging in 2018 have been effective but we need more ambitious measures to save lives. This is an opportunity for Ireland to once again be a European and global leader in tobacco control.”

Tobacco products kill one in every two people. Tobacco 21 won’t change this risk for smokers, but it can reduce the numbers of people becoming tobacco dependent and exposed to tobacco harms in the long term.

For help and support to quit smoking visit www.QUIT.ie.

Image caption (l to r): Coady O'Reilly, Prof Des Cox, Chair of the RCPI Policy Group on Tobacco, and Divine Ikharo pictured at the launch of Tobacco 21.
Coady and Divine are members of Exit Youth Health Foróige Cafe in Tallaght.